Holly Willats is the Director of Art Licks: a not-for-profit organisation based in London that provides support for grassroots activity and artists through its magazine, commissioning programme, and annual festival. Willats has recently been carrying out research in Lisbon for Art Licks.

I was sat with the Portuguese artist Tomaz Hipólito in a traditional, local restauraunt in the Xabregas area of Lisbon, having a lunch of fried fish followed by pears poached in port. We had been discussing Tomaz’s recent international shows and I was curious to know what support he had received to manage such ambitious projects; his answer wonderfully encapsulated the Lisbon way of things: ‘We are magicians’, he said.

I was visiting Lisbon to continue my research into the city’s various galleries, artist studios and project spaces. As my work through Art Licks is based around supporting and collaborating with artists directly, I concentrated my exploration on the non-commercial, artist-led or independent activity in the city. With many artists and curators moving to Lisbon in the last few years, I wanted to understand the reality behind the media’s recent projected image of Lisbon as having a booming, burgeoning art scene [1].

To begin, you have to consider Portugal’s recent financial history. Portugal suffered very badly from the 2008 financial crash and only in the last few years has begun to recover from recession. This recovery has been hugely dependent on a rapid expansion of tourism to the country. There are positive effects of this, significantly, there are jobs in the cities again; but the minimum wage has stayed shockingly low, whilst living costs have become more expensive and rents rapidly increased. A swathe of property development has also taken place very quickly, without regulation, enhanced by the government’s ‘golden visa’ and tax breaks to encourage investment. It appears Lisbon is the latest city to experience the effects of gentrification: with the speed of visitor expansion happening so fast that there hasn’t been time to carefully consider the impact on the local ecology.

For those newly arriving in the city though, Lisbon is very affordable, attracting new artists, curators and writers from the rest of Europe. And there is much to lure you in: the easy-going, friendly nature of Lisboetas (mostly); the beautiful weather, Lisbon’s light (it is after all famously referred to as ‘The City of Light’), its food, wine, proximity to the coast and the ease at which you can get out to the countryside or travel to Porto and its other cities… It is not difficult to glean why many people are moving here, in particular creatives who recognise Lisbon as a city where they can afford to have a good lifestyle.

This appears to be having a mixed affect on the arts. As is often the way with a new influx of creatives, there are some who are investing in the scene, taking care to be informed on the situation and current structure, but there are also others who do not take this time to research and instead have created a parallel scene, of people from other cities who have set things up without research or investment in the community. Overall the expansion of the creative community should be positive, and hopefully with time the more sensitive approach will prevail. 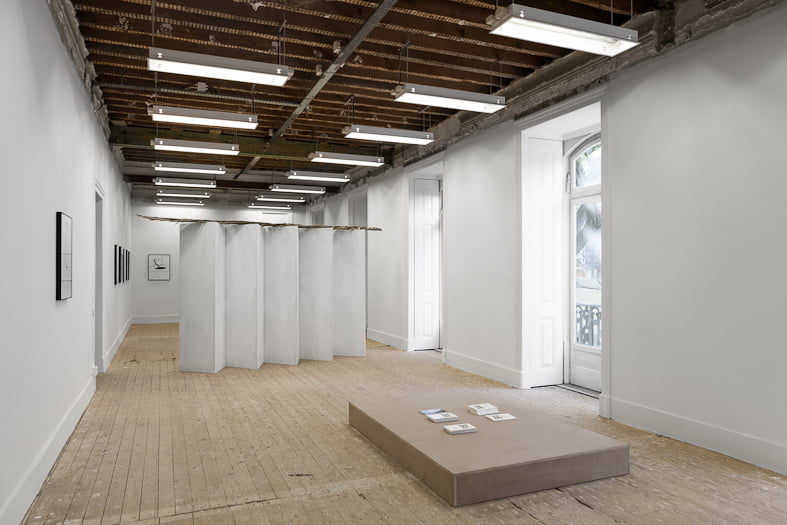 From the interviews with Lisboeta artists and curators I carried out during my trip, the description of the city’s art scene was quite contradictory at points. The majority expressed how the scene is still small, and conservative. The system is based on a hierarchical structure that has not changed for a long time and so its methods are bureaucratic and it is hard to make any serious new change, or disrupt the given positions of influence. That is not to say though that there aren’t people trying to make these changes; and the historical and economic position of Portugal has prompted some exciting and inspiring projects from its artists and curators in response. Whilst the new wave of incoming artists and curators from outside of Portugal could help to refresh these traditions and states of play.

I met with Estelle Nabeyrat, a German-French freelance curator, who has lived in Lisbon for two and a half years and runs a residency and exhibition programme from her apartment called πνεῦμα (Pneuma). The project’s title refers to the text Pneuma by Maria Nordman:

For any two people

who choose the time and place

Estelle explained to me that the programme has received a lot of attention, as it is very unusual for the city – running a project from a home in Lisbon is very irregular – but that at the same time she feels that not much value is given yet to the project. Estelle told me how such alternative projects were needed though to create a forum for critical discussion.

Perhaps the use of informal and domestic space will grow over the next few years as available commercial property in the city becomes difficult to find, or hold on to. It is hard to have a studio in the city centre now, or an empty space to use as a gallery without soon being turfed out for a higher bidder and artists are beginning to look to the edges of the city. For example, when I visited Lisbon in November 2017 a new project space called Ampersand had just opened, but by April 2018 it had closed as the landlord had ended their contract. Syntax, run by Markéta Stará Condeixa – a key project space in the city that many people I met with referred to – had also recently closed due to a lack of funds and increased rent costs. Such a turnaround of projects does not help to give a sense of longevity to grassroots activity.

Other longer-running, important non-commercial spaces in the city are Kunsthalle Lissabon, HANGAR, Oporto and Lumiar Cité run through Maumaus. These spaces are more established and larger scale, but offer dynamic and flexible programmes, and are positively challenging the traditional status-quo.

To run such projects, there are not many funding opportunities, but there is funding available through the municipal and government grants and also through Calouste Gulbenkian Foundation. The city’s institutions are running on small budgets and their workers often don’t have contracts but invoice by day / project: so there is little job security in this respect. During my stay, the museum’s cultural workers had been demonstrating for the government to give more funding and improved working conditions. This contributes to a precarious and unstable job market within the arts, and it seemed many arts practitioners I met weren’t making their living in Lisbon but were able to manage by maintaining work abroad (predominantly teaching work) in order to live in the city. It’s a peculiar reality when people are living in Lisbon and commuting every couple of weeks to other countries for freelance work.

Towards the end of my trip I met with the artist Pedro Barateiro who was one of the co-founders of the previous project space Parqour, and was about to launch Spirit Shop: a new project space within his shared studio. Pedro discussed with me how speed can be an enemy for what he wants to do; he explained how there is a fascination for speed from other industries, but before this recent rapid expansion in Lisbon there was less pressure. It was difficult to be in the city for very different reasons and financially it was a struggle, but they had time: the joy was the time Portugal offered. Perhaps more art is being produced now, but small can be good, and time can be good. Since we met, Pedro opened Spirit Shop with a sage ritual and a presentation of Gabriel Barbi’s paintings; he described the launch to me as having been, ‘very calm just like I wanted it.’

Lisbon is a remarkable city that charms you instantly, both for the beauty of its streets and the nature of its people. When I recently met with the artist Marta Alvim at her studio in nearby Cascais, she introduced me to the Portuguese word, Saudade. We do not have an equivalent word to translate into English, but it refers to a deep emotional state of nostalgic or profound melancholic longing for an absent something or someone that one loves. When I interviewed artists in Lisbon, despite some mixed feelings due to its complex situation at present, I noticed that they have a deep emotional loyalty to the city, and a dynamic, flexible approach to working that I think will be intuitive and sensitive to the developments Portugal is experiencing, and will find a way to work positively with this that makes sense for them.

The subtitle of this article, ‘salt air,’ is a reference to the Cesário Verde’s poem, O Sentimento Dum Ocidental (The Feeling of a Westerner), Verse 1.

[2] For the full text please refer to Pneuma’s website